The goal of the project is to employ precise polarization measurements of SHG, 2PL and THG signals, in order to gain further physical insight into the non-linear properties of nanomaterials.

Despite their similarities, 2PL, SHG and THG are based on fundamentally different phenomena. 2PL relies on nonlinear multiphoton absorption, followed by fluorescence emission, and hence is not a coherent process. SHG, on the other hand, relies on nonlinear scattering, and hence is a coherent process, while THG originates from changes in the samples’ index of diffraction. The consequences of those basic differences are exploited and utilized in this project as new contrast mechanisms for characterizing nanomaterials of interest (see Figure 1).

Specifically, SHG is a coherent second-order nonlinear phenomenon, and thus its strength is fully determined by the second-order susceptibility tensor of the nonlinear medium. This tensor is non-vanishing only for non-centrosymmetric media and reflects the nonlinear response of materials at the atomic level.

Additionally, the polarization dependency of SHG (P-SHG) reveals the orientational distribution of armchair orientations and their degree of organization in the two-dimensional (2D) crystal lattices of 2D materials. This enables us to distinguish between different crystallographic domains, locate boundaries and reveal atomic structure. As a consequence, we can calculate the mean orientational average of armchair angle distributions in specific regions of interest and define the corresponding standard deviation as a figure-of-merit for the 2D crystal quality (Figure 2).

Moreover, we use P-SHG to rapidly map the twist angle of the individual layers in stacked multilayered 2D materials and to map the electrons population imbalance in such 2D materials. 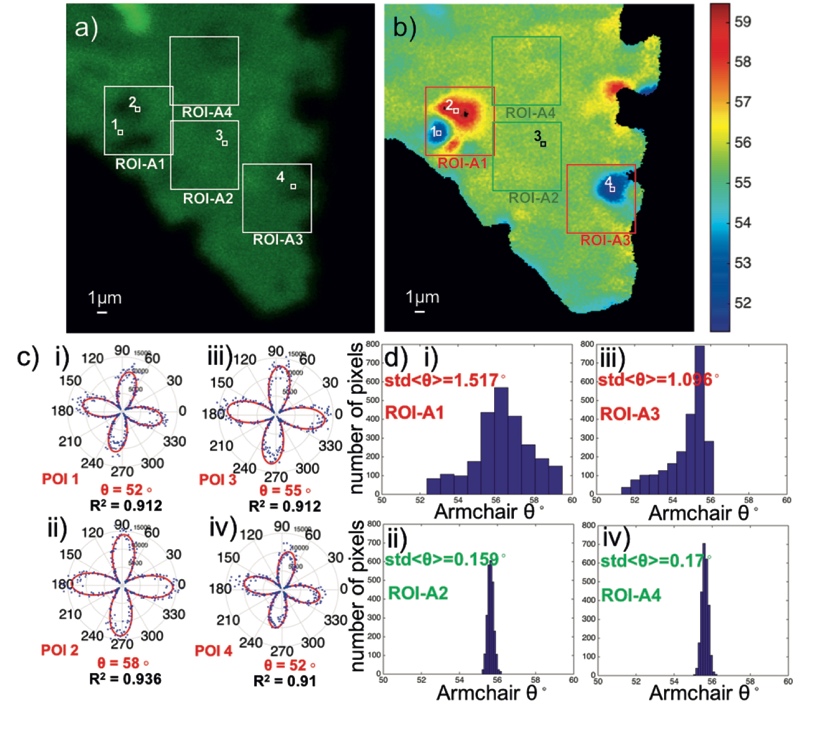