The objectives of the project are to utilize non-invasive invasive, high-resolution, fs laser raster-scanning imaging microscopy and analysis methods through the systematic use of multiphoton excited fluorescence (2p and 3p), polarization-resolved second harmonic generation (P-SHG) and polarization-resolved third harmonic generation (P-THG), to quantitatively characterize the structure and function of living cells and tissues at video rates. 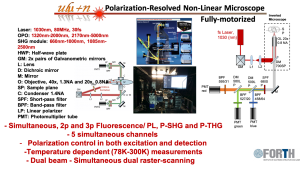 Both the above advanced optical microscopy techniques are based on minimally invasive fs laser irradiation and provide intrinsic z-sectioning due to signals nonlinear dependence on the excitation photon flux. Since the fs laser interaction is minimal, fairly nonlinear microscopy is considered as the most appropriate for live-imaging. It is based on signals originating from endogenous non-centrosymmeric molecular assemblies and lipids or on signals from exogenous species like fluorescence chromophores or nanoparticles to provide contrast. Furthermore, the infrared wavelengths used allow penetration depths (of several hundred microns into highly turbid tissues), unreachable by the common linear fluorescence or confocal microscopy.

By varying the polarization angle of the excitation field in collagen and myelin and recording the second and third harmonic intensity, respectively, we are able to produce polar diagrams whose patterns are consequently connected with the direction of the collagen and myelin molecules. Such a link is made possible through application of nonlinear optics and the derivation of equations for SHG and THG intensity that are used to fit the experimental data and infer the values of interesting parameters such as the collagen and myelin orientation and organization. This procedure allows to extract quantitative parameter values and establish a direct connection between the polarization state of the produced light and the health state of the corresponding cellular structure.

In particular, our studies on myelin, a cylindrical insulating sheath that forms around nerves, suggest that the nonlinear signal produced by mutant myelin samples differs dramatically from that of healthy ones and thus may be used as a diagnostic tool for myelin degeneration. During the theoretical treatment, myelin is approximated with a hexagonally symmetric crystal and analytical expressions are derived for the myelin third harmonic generation for both linear and circular excitation conditions.

The continuous interaction between theory and experiment within the Imaging subgroup offers an ideal means for enhancing our insight on the nonlinear phenomena occurring in organic systems under intense laser light excitation and allows for both prognostics and diagnostics of biological samples. 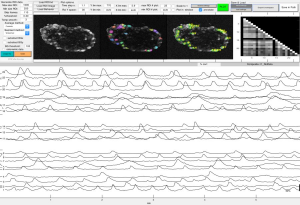 Simultaneous two and three photon (2p-, 3p) excited fluorescence used to visualize and characterize live and fixed brain slices, either via the use of fluorescent dyes or by excitation of autofluorescence. 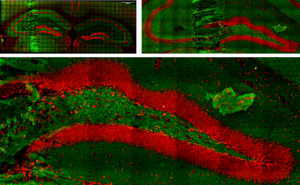 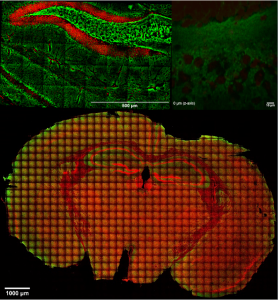 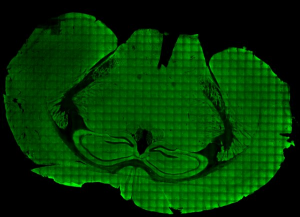 Brain slices, supplied with nutrients and oxygen in a special incubator placed at the sample plane of the microscope, are kept alive and healthy for hours during imaging, enabling the study of brain’s response to special conditions like hypoxia. 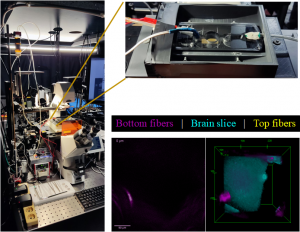 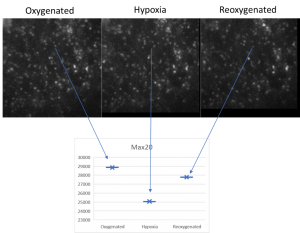 In the incubator (Ambient and living slices supporting medium temperature control, CO2 and O2 control) we can image cellular cultures for long periods, while by making collages of images we can study arbitrarily large areas with μm resolution. 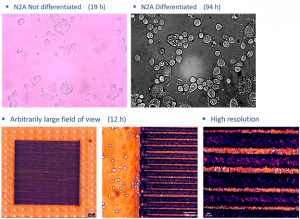 Using fluorescent dyes the electrical activity of cellular cultures and tissue is recorded via 2-PEF, providing valuable information about their dynamical connectivity and condition. 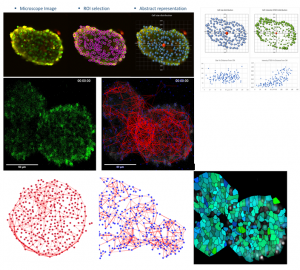 P-SHG has been used in our lab to visualize for the first time and optically characterize the evolution of collagen remodeling in collagen-based scaffolds seeded with live cells. 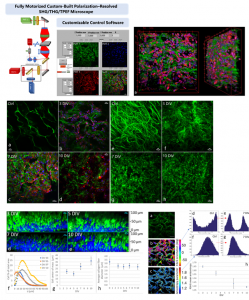