Although surface patterning has been previously investigated upon irradiation with ultrashort pulses in ablation conditions, physics fundamentals of surface modification and a novel surface patterning mechanism for ultrashort pulses have never been addressed in conditions near evaporation (sub-ablation). More specifically, we suggested a new physical mechanism that governs surface patterning formation (i.e. ripples) based on a combination of interference effects (and development of surface plasmon waves) coupled with hydrodynamics capillary induced effects and the dynamics of a superheated liquid layer. The ripple periodicity and morphological changes appear to agree satisfactorily with experimental observations. The model has been revised to allow the description of supra-wavelength structures (grooves) that result from the formation of hydrothermal convection rolls (Fig.1,2). Experimental results supported with theoretical simulations of the underlying physical processes manifest the universality of the mechanisms regardless of the type of the material (Fig.1). 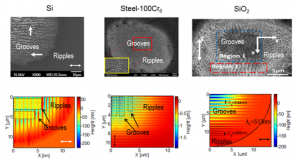 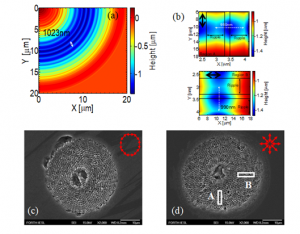 Direct laser Interference Patterning (DLIP) with ultrashort laser pulses (ULP) represents a precise and fast technique to produce tailored periodic sub-micrometer structures on various materials. An experimental and theoretical approach is pursued to investigate the previously unexplored fundamental mechanisms for the formation of unprecedented laser-induced topographies on stainless steel following proper combinations of DLIP with ULP. Special emphasis is given to electron excitation, relaxation processes and hydrodynamical effects that are crucial to the production of complex morphologies. Results are expected to derive new knowledge of laser-matter interaction in combined DLIP and ULP conditions and enable enhanced fabrication capabilities of complex hierarchical sub-micrometer sized structures for a variety of applications. 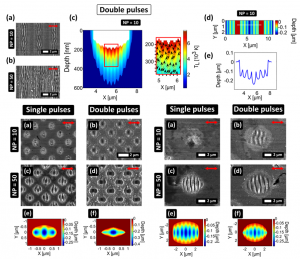 Figure 4: Patterned profile based on DLIP technique with a two (A) and four (B) laser DLIP beam. Patterned surface is illustrated for single or two delayed pulses. Experimental results are interpreted through simulations.

Figure 6: (a) Reflectivity as a function of the photon energy through DFT calculations, (b) coupling of DFT calculations with TTM to compute carrier density evolution for 6H-SiC. 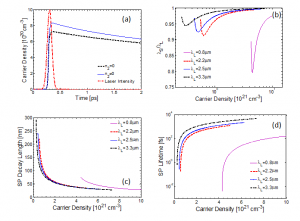 A multiscale modelling approach is performed that correlates conditions for formation of perpendicular or parallel to the laser polarisation low spatial frequency periodic surface structures for low and high intensity mid-IR pulses (not previously explored in dielectrics at those wavelengths), respectively. Results demonstrate a remarkable domination of tunneling effects in the photoionisation rate and a strong influence of impact ionisation for long laser wavelengths. The methodology presented in this work is aimed to shed light on the fundamental mechanisms in a previously unexplored spectral area and allow a systematic novel surface engineering with strong mid-IR fields for advanced industrial laser applications. 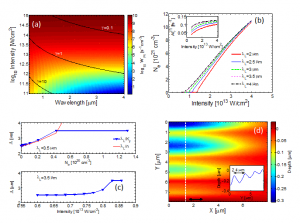 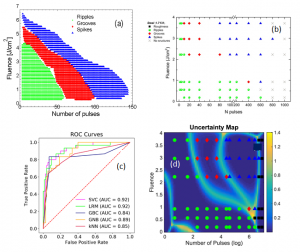 Figure 9: (a) Simulated data based on physics modelling, (b) experimental data, (c-d) Machine learning based approaches results. Stainless steel is used as a test material.