We focus on the development of novel ultrafast pulsed laser processing schemes for controlled structuring at micro- and nano- scales of a variety of solid materials. By applying single or temporally shaped ultrashort UV, VIS and IR laser pulses, novel surface structures with features ranging from a few hundreds of nanometers to micron-sized ones are produced, while the physical properties of the processed semiconductor, dielectric and metallic surfaces are significantly modified. Developed methods include laser micro/nano surface structuring performed in different media, direct laser writing with variable laser polarization states and combination of those. Further control over the surface topology is achieved by proper functionalization of the 3D structures obtained with well-defined nanostructures.

The artificial surfaces developed by processing under ambient or controlled gaseous environments exhibit controlled roughness that mimics the complexity and hierarchical morphology of natural surfaces with exciting functional properties, i.e. the water repellence of a Lotus leaf, the low underwater friction properties of shark skin, the coloration and anti-reflection properties of butterfly wings. The biomimetic morphology attained gives rise to notable multifunctional properties when combined with methods of tailoring the surface chemistry.

Research results indicate that appropriate combination of topography and chemistry can lead to artificial surfaces that: (a) are of extremely low surface energy, thus water repellent and self-cleaned, (b) exhibit reduced friction under specific lubrication conditions, (c) are anti-reflective and iridescent, (d) exhibit the exceptional abilities of meta-surfaces in light manipulation, (e) are smart, i.e show the ability to change their surface properties in response to different external stimuli and (f) arevmulti-functional in the sense that exhibit multiple functionalities at the same time. 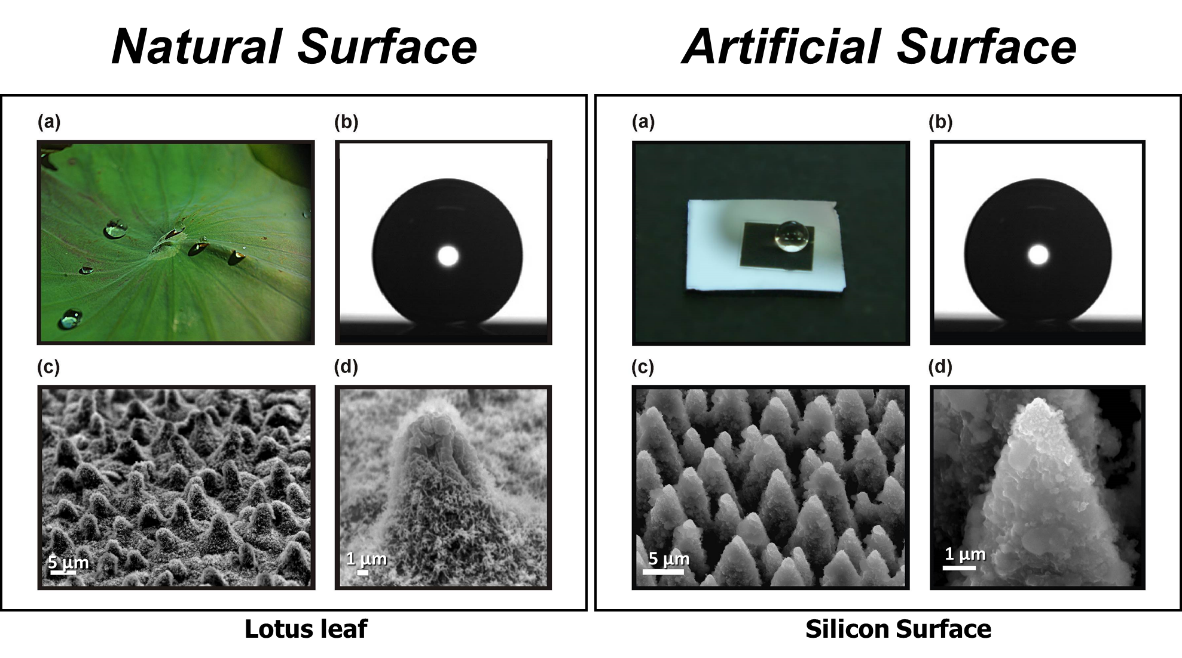 b) Optical properties Based on the concepts and underlying principles discovered in nature, an interdisciplinary field has been developed, aiming to design and fabricate photonic biomimetic structures. This capability comes as the outcome of the optimal combination of the ultrafast laser field and material properties that enable the production of features with sizes beyond the diffraction limit (i.e., nanoscale) that can mimic the functionalities of cicada and butterfly wings. A prominent example is the formation of self‐organized subwavelength, laser‐induced periodic surface structures (LIPSS), which have been proven an important asset for the fabrication of nanostructures with a plethora of geometrical features. With precise ultrafast laser processing we can produced high anti-reflective artificial glass surfaces and high absorbing metal and semiconductor materials. 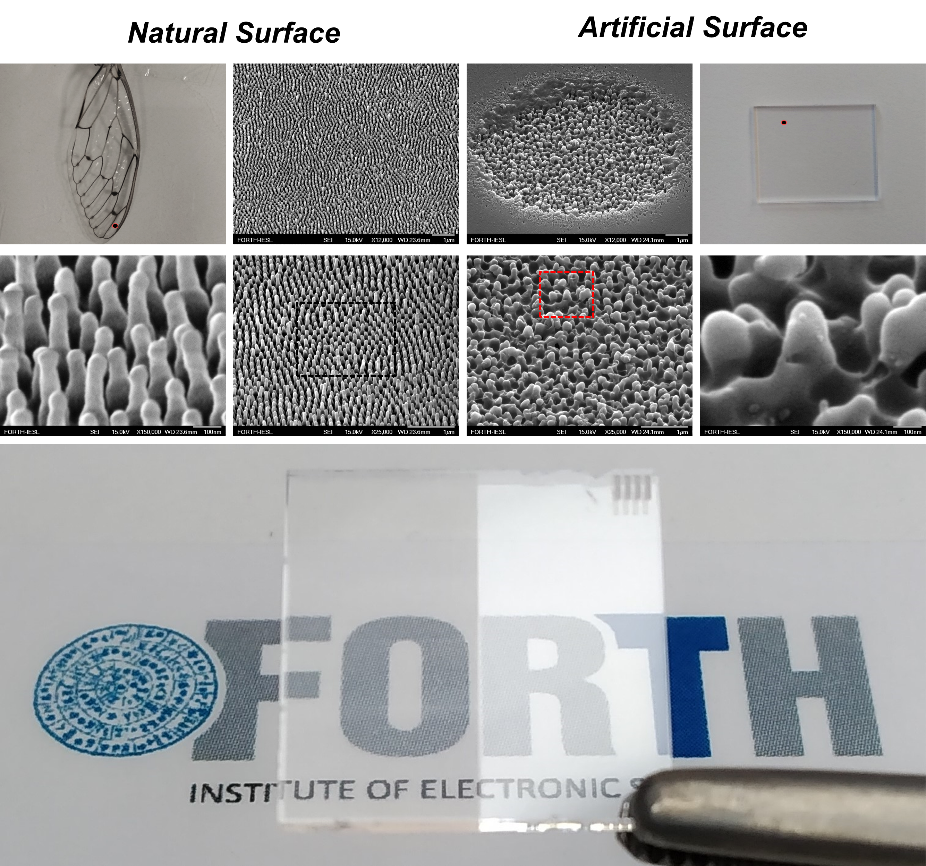 c) Tribological properties: A prominent aspect of the fs laser material interaction is that the spatial features of the surface structures attained are strongly correlated with the laser beam polarization. However, to date, laser fabrication of biomimetic structures has been demonstrated using laser beams with a Gaussian intensity spatial profile and spatially homogeneous linear polarization. In this context and based on the sensitivity of laser induced structures on laser polarization, it is possible to further advance the complexity of the fabricated structures via utilizing laser beams with a spatially inhomogeneous state of polarization. Therefore we can mimic the skin of elasmobranches like shark for in water drag reduction and reduced friction sliding friction under the presence of oil lubricance.

Employing DPI enables us to intervene into the evolution of the structure formation in a non-deterministic way. The interpulse delay (Δτ) is considered the main parameter in DPI, since it defines the stage of structure formation process, which is targeted by the second pulse. Depending on the Δτ value several effects have been observed on 2D LIPSS formation on stainless steel (4). When 1 ps < Δτ < 10 ps the hierarchical morphology of triangular 2D-LIPSS was tailored via tuning the high spatial frequency LIPSS (HSFL) formation (Figure 1, left). At Δτ = 20 ps 2D-HSFL were obtained and a structure morphology inversion was observed (Figure 1, center). When Δτ ranges in the nanosecond timeframe the microfluidic motion of the melt reaches its maximum amplitude. Then the second pulse intervenes to the existing temperature profile and impacts Marangoni flow. We showed that at Δτ = 0.5 ns a variety of 2D subwavelength structures were obtained (Figure 1, right), assuming the development of convection flow (CF) on the surface. According to CF theory the pattern formation apart from the amplitude and temporal profile of the excitation depends on the excitation profile, i.e. the spot profile in the case of laser irradiation (Process I). Therefore, by means of DPI we can manipulate the CF dynamics, while upon tuning of the spot profile we could define the CF pattern that will be developed.

Intensive experimental observations of LIPSS over a wide range of materials have been accompanied by theoretical studies. However, the underlying physical mechanisms are still under debate. We investigate the impact of the surface morphology on the spatial period and orientation of ripples. The LIPSS formation on pre-patterned surfaces aims to reveal more information regarding to the physical information of the ripples formation induced by ultrashort laser pulses. Understanding the underlying physical mechanisms is the key to control their feature characteristics in different materials. 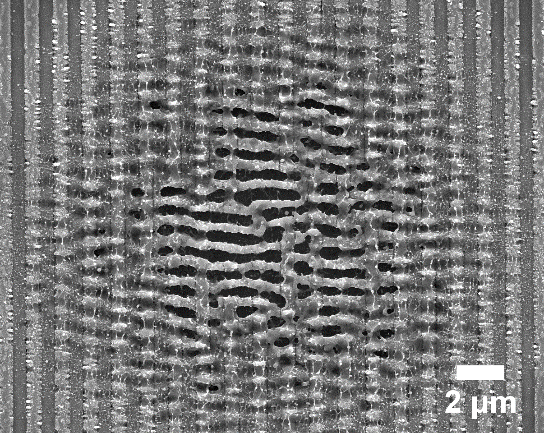 Figure 5: SEM micrograph of laser-induced ripples on a pre-patterned surface

Metasurfaces are two-dimensional metamaterials with planar and ultrathin nanostructures that have shown exceptional abilities in light manipulation and versatility in optical applications. The core research strategy here is to exploit ultrafast laser fabrication technology combined with the state-of-the art planar metamaterial designs in order to engineer the geometric parameters of artificially constructed subwavelength meta-atoms and, thus generate a variety of metasurfaces that will enable the manipulation of optical waves in a prescribed manner.

Tsibidis G.D., ‘The influence of dynamical change of optical properties on the thermomechanical response and damage threshold of noble metals under femtosecond laser irradiation’, Journal of Applied Physics 123, 085903 (2018).